OBS Integration must be configured through the settings tab, and is considered an advanced feature. We recommend only using this feature after coordination with FRC Event Support!

OBS Websockets / OBS Integration allows you to control your video feed (for use on a webstream, or potentially on a scoreboard at off-season events) via the free OBS Software and use of the FIRST FMS Audience Display by automatically changing what the audience is seeing based on what is happening at the event, without the need for an operator. To do so, configure the two required programs as outlined below. 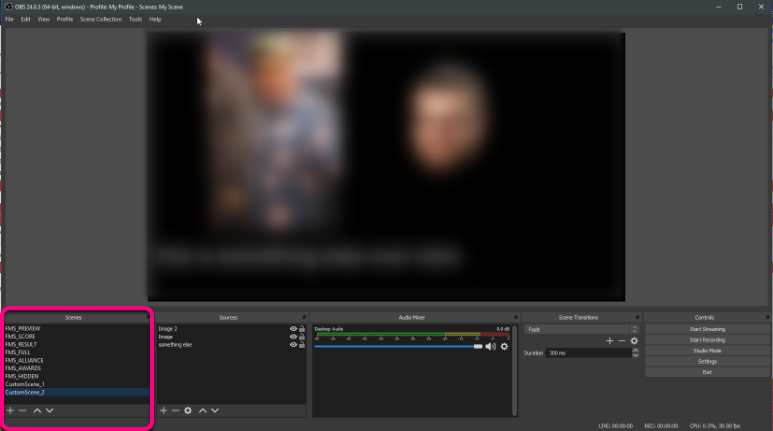 The OBS Integration will tell the Audience Display to change scenes in OBS automatically as the match and event progress. In order to do so, it relies on Scenes to be named exactly as specified in this documentation. Using the Scenes area (marked above in pink) create the Scenes you are interested in using, detailed below. NOTE: Two scenes minimum are required: FMS_FULL and FMS_HIDDEN at bare minimum for any operation to take place.

Note that adding additional scenes beyond those listed is also fine. In the above example Scenes "CustomScene_X" have been added. These scenes can be used at other times during the event, but remember that with the integration enabled, it will return to the "FMS_" scenes on the next Audience Display trigger.

Don't forget to configure the Audio the desired way in each scene, or globally!

DO NOT ENABLE THIS FEATURE WITHOUT HAVING WEBSOCKETS ENABLED IN THE OBS SOFTWARE, OR MATCH PLAY MAY BE IMPACTED!

Look for the OBS Integration options in the settings tab to enable the feature. Only enable the feature after enabling Websockets in the OBS software. The default address should be sufficient for most use cases, and should contain the address (starting with WS) and including the port number (default of 4444). Select a passkey (consisting of 4 digits) to encrypt your connection.

There are no other settings to change in the Audience Display.