This step appears twice in the Event Wizard, but behaves similarly in both cases. For some events, like Districts, there are no awards on the first day (in which case the first Award Assignments step is simply not used). 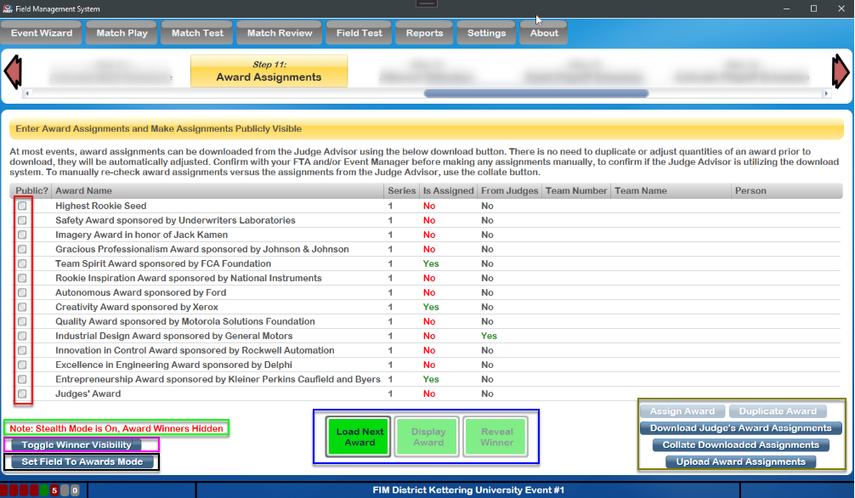 [Red] In order for an award to be visible on the web through the FIRST website, it must be marked as "Public" using the checkbox in that award's row.

[Green] Indicates whether or not stealth mode is on, see below for more information.

[Black] Using the Set Field to Awards Mode button the lights and team signs can be changed in the arena to a more universal look that's ready for the awards ceremony.

[Pink] Use the Toggle Winner Visibility button to enter or leave "Stealth Mode", as described below.

[Blue] Control buttons used to manage the award presentation process, as described below.

[Gold] Controls the receipt of, assignment of, and upload of awards, as described below.

After all awards for the day (or the event) have been presented, use the Upload Award Assignments button to send those assignments (if marked with Post) to the FIRST website. 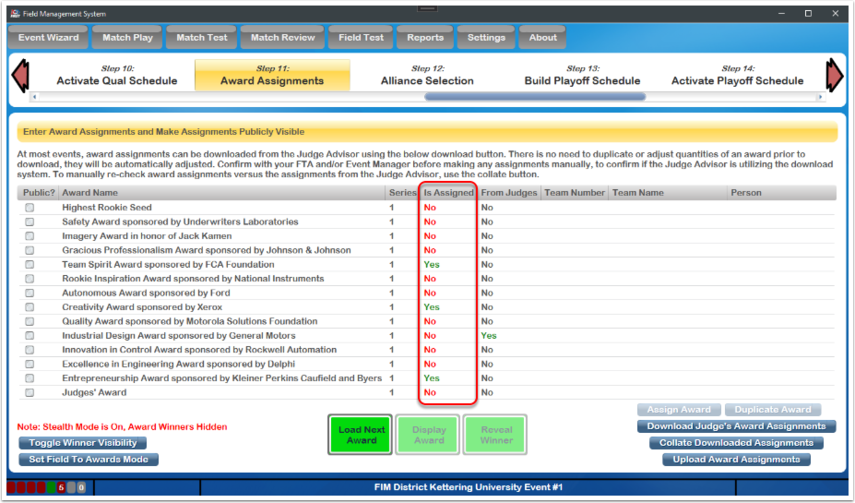 When stealth mode is enabled the data in "Team Number", "Team Name" and "Person" fields is hidden, and a message is added on the bottom left. This data remains hidden until the button is toggled again. The data can be viewed once again by toggling the stealth mode off using the "toggle winner visibility" button. Note that stealth mode is on by default when the award page is loaded, and would need to be manually toggled off. Regardless of the state of stealth mode, the "Is Assigned" column indicates whether an award has been assigned or not, allowing confirmation that all awards have been assigned without the need to toggle stealth mode and risk revealing any winner data to nearby individuals.

At official FIRST Robotics Competition Events where Awards are presented, the default method of assigning awards is to download them from the Judge Advisor. This minimizes the chance of input error while also providing efficiency for the Scorekeeper during a busy time of the event. Not all events will utilize the Judge Assignment download system, in cases where the download is not in use, awards can be assigned using the manual method described below, and utilized in previous seasons. Check with the Event Manager or Judge Advisor to determine which method to use. 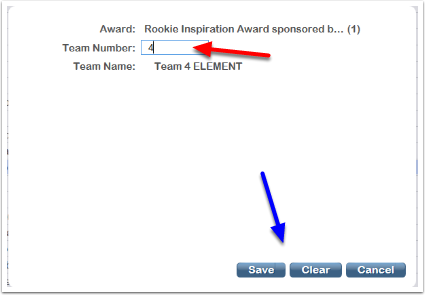 To assign an award:

(1, top photo) Click on an Award to present (the background of the row will turn blue)

(Red, bottom photo) Type the team number of the winning team, and the team name will appear below as the team number is typed. If the award is presented to a team that's not competing (such as at District Championships) the number will show a red triangle "error" indicator, meaning the team did not compete at the event. This can be bypassed later to still assign the award.

(Blue, bottom photo) After a team and/or person has been entered, the Save button commits this change. Cancel ignores the edits, Clear removes the award winner.

In normal operation, these steps are done for each award in advance of the award ceremony. See the scorekeeper step-by-step for more information.

For award presented to individuals, such as Volunteer of the Year, a person first/last name box is offered on the award assignment screen as shown below. 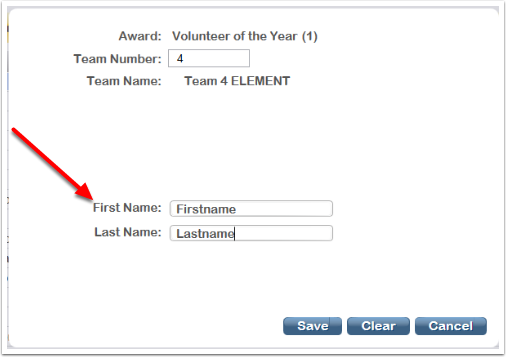 Some award require the winning team/person to have previously applied or been nominated, such as the Woodie Flower's Award. In these cases, when the assigning the award in FMS, a drop-down list of potential winners will be offered. The winning team should be included on the list, and selecting them will populate the corresponding data on the assignment screen. Select save to commit the change, as with other awards. For awards where nominees are a specific person, from a specific team, the person first and last name fields additionally appear as shown below to the right. Selecting the winner from the dropdown completes all necessary corresponding fields.

When a team number is entered on the Assign Award dialogue, there are potential confirmation messages that can be presented. 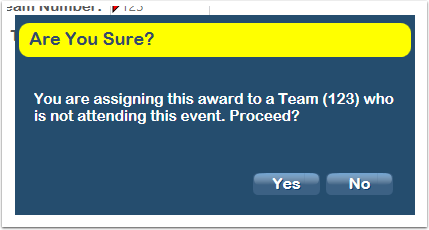 Awards can be assigned to any registered FRC Team in a given season, even if that team is not present at the event. This situation applies only to District Championship and FIRST Championship events, where a team does not always have to be competing at the event to win the award. If an attempt is made to assign an award to a team not competing, confirmation is required. 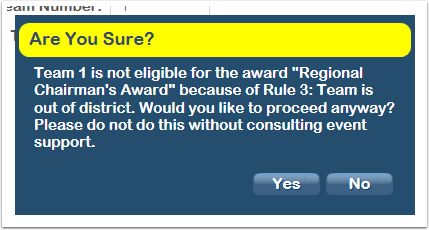 Upon each award assignment, the assignment is compared against an eligibility algorithm for the given team to determine if they qualify for that award. If an attempt is made to assign an award to an ineligible team, a message is presented and requires confirmation. Consult with the Judge Advisor for additional information.

If more than one instance of an award is being presented, but not enough instance are showing in the available awards list, a duplicate can be made. For example, if two Judges' Awards are presented, click on the Judges' Award and press the Duplicate Award button on the bottom of the screen. A second instance (with "Series" 2) will be created and available for assignment.

FMS Off-Season does not support award distribution, and as such all buttons will be “grayed out” on the two award assignment wizard steps.

The awards are likely displayed in the order in which they are being presented, however it is a good idea to verify the presentation order with your Event Manager To present an award during the award ceremony:

1) The Load Next Award button advances the highlighted row (award) to the next row/award.

2) The Display Award button displays a "frame" on the Audience Display informing them which award is being presented.

3) ONLY AFTER THE EMCEE HAS ANNOUNCED THE WINNING TEAM NUMBER The Reveal Winner button displays the winning team's number and name to the Audience. See Audience Screen for examples of what these screens look like. DO NOT REVEAL A WINNER (real or fake) TO "TEST" THE AUDIENCE DISPLAY- use the test displays!