This is a minimal Java robot program that writes a value to the SmartDashboard. It simply increments a counter 10 times per second to verify that the connection is working. 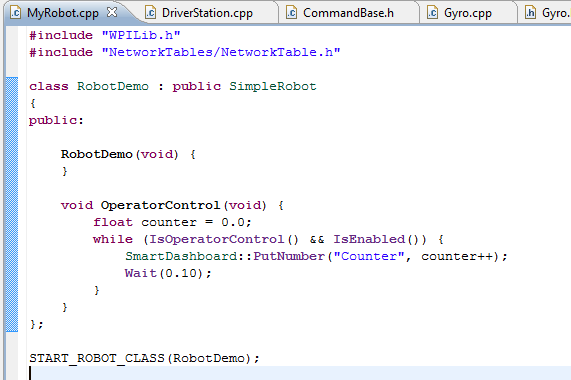 This is a minimal C++ robot program that writes a value to the SmartDashboard. It simply increments a counter 10 times per second to verify that the connection is working.

SmartDashboard output for the sample program 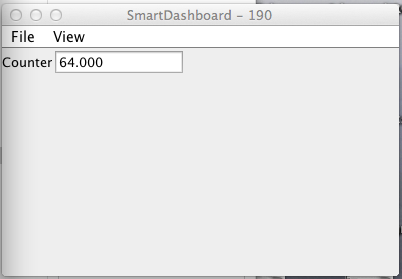 The SmartDashboard display should look like this after about 6 seconds of the robot being enabled in Teleop mode. If it doesn't then you need to check that the connection is correctly set up.

Verifying the IP address in SmartDashboard 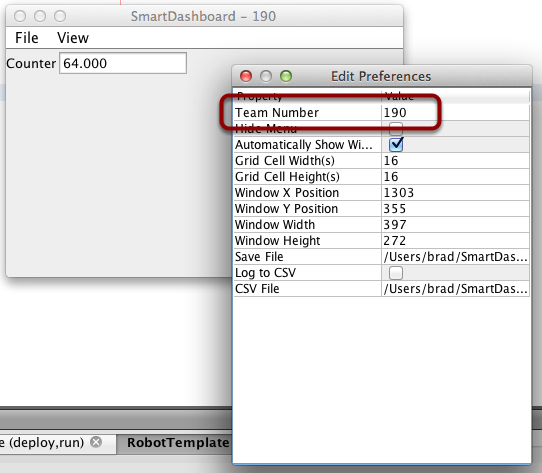 If the display of the value is not appearing, verify that the team number is correctly set as shown in this picture. You get to the preferences dialog by selecting File, then Preferences.

Using TableViewer to verify that the program is working

You can verify that the robot program is generating SmartDashboard values by using the TableViewer program. This is a java program, TableViewer.jar that is located in the sunspotfrcsdk/tools folder for NetBeans installations or in C:\WindRiver\WPILib folder for Workbench installations. It is run with the command: java -jar TableViewer-r355.jar. The version number in your installation might be different.

Look at the second row in the table, the value "SmartDashboard/Counter" is the variable written to the SmartDashboard via NetworkTables. As the program runs you should see the value increasing (44.0 in this case) and the sequence number also increasing (648 in this case). The sequence number is incremented as new values are written and is a way of keeping multiple clients and server in sync. If you don't see this variable in the TableViewer then you should look for something wrong with the robot program or the network configuration.