Choosing a Base Class

The base class is the framework that the robot code is constructed on top of. WPILib offers two different base classes, as well as a third option which is not technically a separate base class. 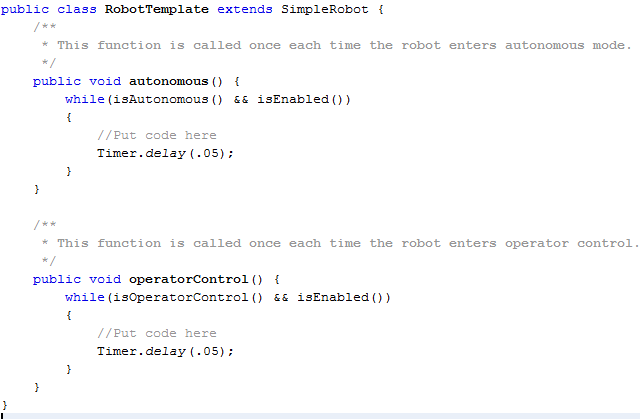 The SimpleRobot class is the simplest to understand as most of the state flow is directly visible in your program. Your robot program overrides the operatorControl() and autonomous() methods that are called by the base at the appropriate time. Note that these methods are called only called once each time the robot enters the appropriate mode and are not automatically terminated. Your code in the operatorControl method must contain a loop that checks the robot mode in order to keep running and taking new input from the Driver Station. The autonomous code shown uses a similar loop. 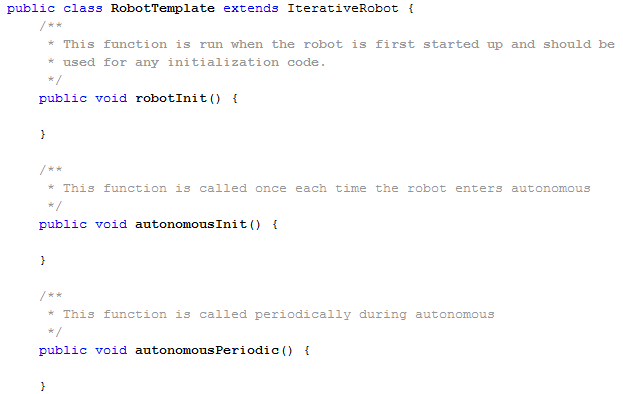 The Iterative Robot base class assists with the most common code structure by handling the state transitions and looping in the base class instead of in the robot code. For each state (autonomous, teleop, disabled, test) there are two methods that are called:

While not strictly a base class, the Command based robot model is a method for creating larger programs, more easily, that are easier to extend. There is built in support with a number of classes to make it easy to design your robot, build subsystems, and control interactions between the robot and the operator interface. In addition it provides a simple mechanism for writing autonomous programs. The command based model is described in detail in the Command Based Programming manual.