Commands can be nested inside of command groups to create more complex commands. The simpler commands can be added to the command groups to either run sequentially (each command finishing before the next starts) or in parallel (the command is scheduled, and the next command is immediately scheduled also). Occasionally there are times where you want to make sure that two parallel command complete before moving onto the next command. This article describes how to do that.

Creating a command group with sequential and parallel commands 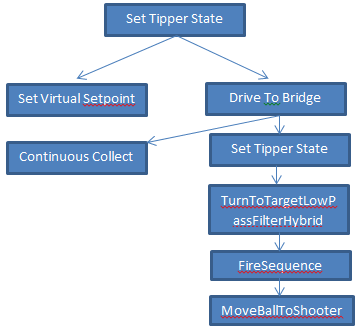 Here is the code shown above represented as a flowchart. Note that there is no dependency coming from the commands scheduled using "Add Parallel" either or both of these commands could still be running when the MoveBallToShooter command is reached. Any command in the main sequence (the sequence on the right here) that requires a subsystem in use by a parallel command will cause the parallel command to be canceled. For example, if the FireSequence required a subsystem in use by SetVirtualSetpoint, the SetVirtualSetpoint command will be canceled when FireSequence is scheduled. 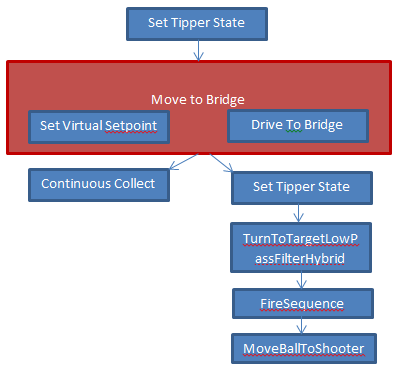 In this example you can see that the addition of a command group "Move to Bridge" containing the Set Virtual Setpoint and Drive to Bridge commands forces both to complete before the next commands are scheduled.