What is Command based programming?

Command based programming supports all these goals easily to make the robot program much simpler than using some less structured technique.

Programs based on the WPILib library are organized around two fundamental concepts: Subsystems and Commands.

Subsystems - define the capabilities of each part of the robot and are subclasses of Subsystem.

Commands - define the operation of the robot incorporating the capabilities defined in the subsystems. Commands are subclasses of Command or CommandGroup. Commands run when scheduled or in response to buttons being pressed or virtual buttons from the SmartDashboard.

Commands let you break up the tasks of operating the robot into small chunks. Each command has an execute() method that does some work and an isFinished() method that tells if it is done. This happens on every update from the driver station or about every 20ms. Commands can be grouped together and executed sequentially, starting the next one in the group as the previous one finishes. 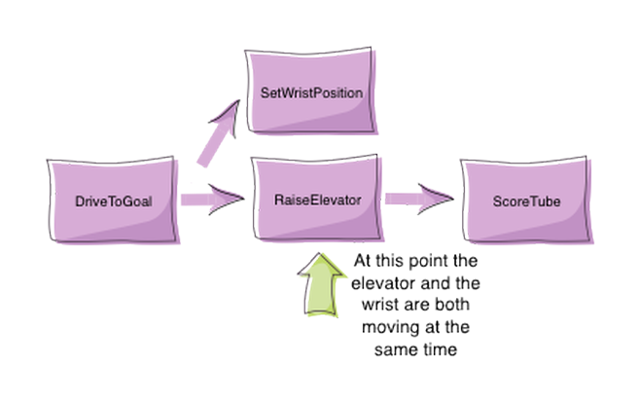 Sometimes it is desirable to have several operations happening concurrently. In the previous example you might want to set the wrist position while the elevator is moving up. In this case a command group can start a parallel command (or command group) running.

How It Works - Scheduling Commands 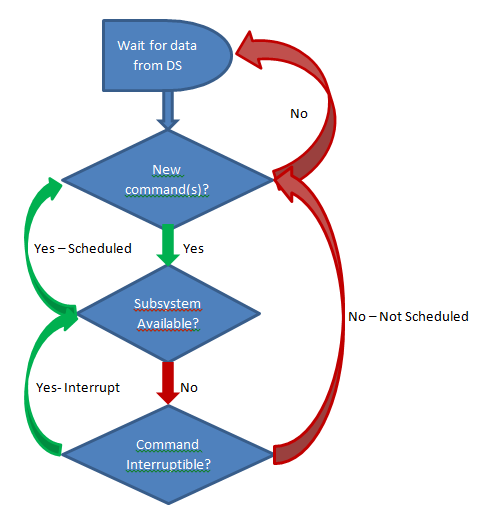 There are three main ways commands are scheduled:

Each time the driver station gets new data, the periodic method of your robot program is called. It runs a Scheduler that checks the trigger conditions to see if any commands need to be scheduled or canceled.

How It Works - Running Commands 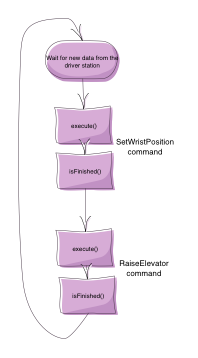 After checking for new commands, the scheduler proceeds through the list of active commands and calls the execute() and isFinished() methods on each command. Notice that the apparent concurrent execution is done without the use of threads or tasks which would add complexity to the program. Each command simply has some code to execute (execute method) to move it further along towards its goal and a method (isFinished) that determines if the command has reached the goal. The execute and isFinished methods are just called repeatedly.

More complex commands can be built up from simpler commands. For example, shooting a disc may be a long sequence of commands that are executed one after another. Maybe some of these commands in the sequence can be executed concurrently. Command groups are commands, but instead of having an isFinished and execute method, they have a list of other commands to execute. This allows more complex operations to be built up out of simpler operations, a basic principle in programming. Each of the individual smaller commands can be easily tested, the the group can be tested. More information on command groups can be found in the Creating groups of commands article.